An atmospheric mystery sees Cold Case Detective Lauren Riley trapped within a hotel during a snowstorm with the prime suspects in an unsolved murder 17 years earlier, and her partner is one of them. 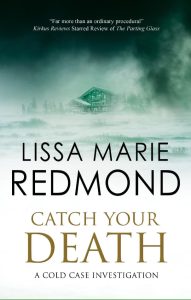 Redmond will be signing copies of her latest release, Catch Your Death.

When Riley’s partner, Shane Reese, runs into an old friend, he’s invited to a school reunion at a new luxury spa and resort. Lauren’s also invited and it sounds like a perfect weekend getaway, except it brings up painful memories for Reese — like the unsolved murder of his high school friend Jessica Toakese 17 years earlier.

The prime suspects will be at the reunion. Among those suspects is Reese, who has kept his involvement a secret from Lauren and the entire police force. As the friends reminisce, an intense snowstorm traps them inside and tensions rise. After a heated confrontation, one of the party is brutally murdered and Lauren believes it’s connected to Jessica’s death.

But who could the murderer be: the jealous husband, the regretful trophy wife, the abused failed actor, the true crime podcast host, the drunken louse, the insecure millionaire, the desperate spa owner … or the cold case detective?